This week (starting last week) I started to buckle down and get strict about the wedding planning. With so much set (big stuff) it's time to start listing out the little stuff one can forget. o.O Not good stuff to leave out either mind you. SO MUCH STUFF TO DO! Oy!

But, I got lists written and some shopping done. I also tackled the flower girl baskets tonight. The traditional white satin baskets don't appeal to me. I like things to be earthy and natural. Granted, there's so much in a wedding that isn't (i.e. wedding dress), at least for mine. But there are other items I can make earthy. :) This is one of them. I went out with Candace the other day, and during our visit to Hobby Lobby (truly a haven) we saw that the baskets were 50% off. I saw two dark wicker baskets and knew immediately these were it! Today I bought some more flowers, including some large daisies...at of course...Hobby Lobby. They're all fake, but I'm totally okay with that (who isn't?).

So here is one, I just finished it and think I'll get to the second one after I get some feedback. Don't want to do it all over again if they don't look right or professional (well put together). I've never done this before, and flower arranging isn't a skill I've practiced. But thought I'd give a crack at it.

All of the flowers aside from the small white ones with beads are used elsewhere in the wedding reception. My wedding flower is the white daisy (shasta or vero), so not typically that large, but thought since it's such a simple flower one could play around with size. ;) 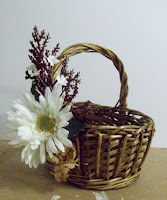 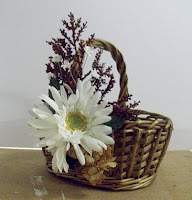 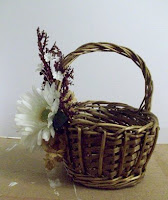 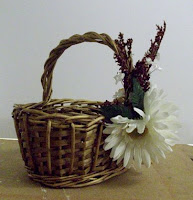 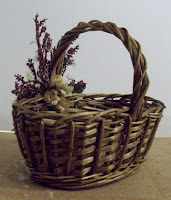 they look lovely! I don't think that you need to change anything. They look free spirited and fresh!