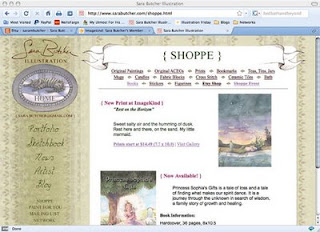 Finally I got my website updated today. It's been over a month since I've done it last. Wedding planning, work, and commission projects have become so overwhelming that I feel like I'm just staring out the window. So to jump start myself I got my work hat on and uploaded the changes. Next stop, my newsletter. Poor thing...

Here's what's new!
Added "Rest on the Horizon" over at ImageKind, so it's now available as a print.
Listed "Faith" on Etsy.com
Added paintings to my portfolios: Whimsical, Elegant, Fantasy
Added sketches to my Sketching Board
Updated my shoppe (pictured to the right)

The same article as before but posted in the paper for Woodbury and Southern Maplewood MN. The author emailed me today and said that the St Paul Pioneer Press will be sending out a reporter to do another story. The St Paul Pioneer Press is one of the two largest papers in the Twin Cities area in Minnesota. I'm thrilled to see the book gain this much exposure and I thank God for blessing Diane Hovey and her family for all that they have done! Remarkable!

If you missed it the first time visit the story. :) It's beautiful. I'll keep you posted about the Twin Cities paper article. Pray something comes of it! 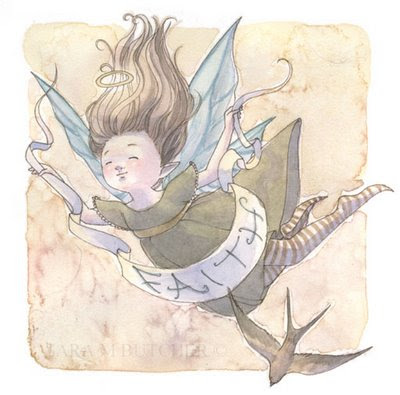 So tonight, oh about 2am, I guess that's morning, I decided to finally paint this piece. Seems to be a pattern. I drew this at the same time I did all of the fairy blessings, that was before Christmas. It has been sitting in a basket on my drawing table staring me in the face since then. I wanted to try something different.

Interestingly enough, the title of the piece is "Faith", picked the day I drew it. I took a leap of faith with the drawing by applying a very loose variation of my technique, thinking less, and just doing. It's a struggle, believe it or not, for me not to get obsessive with detail in the painting process. I blend my colors fraying my brushes quicker than most, and go through lots of water (most of it goes into the paper towel).

Looking through my works I love the pieces I did for Illustration Friday, tho they are mostly digital. If I had a technique down to be able to paint them in under an hour I would have. A motivation to create one. A new technique.

I adored this drawing the moment I made a wee sketch of the concept in my sketchbook. It doesn't have the usual white acrylic applied, nor the amount of detail I would normally add. But I don't mind the looseness and energy it carries.

I hope to do more pieces in this technique. :) My new whimsical! Woo! :P

Rest on the Horizon 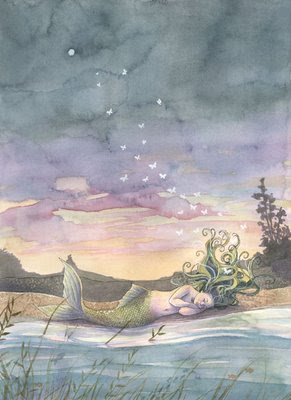 "Rest on the Horizon"
8x11 Watercolor

Thank you Candace for the motivation. I started this piece a few months ago...literally, and it has been taped to my drawing table since then. Other projects have been laying on top of it (with a board of course) but it never left my mind. I experimented with it in the beginning, which I think helped me loose interest in it at first. As much work as the scales take, I enjoyed painting them tonight.

It's been a long while since I did a purely fantasy piece. Although, it fits the children's books too. :)

The author of "Princess Sophia's Gifts" contacted me not too long ago about illustrations to place in an article her local newspaper wanted to feature. The article was to be based around her work, her daughter Sonia, and the book. I'm very excited to share this article with you! It's full of motivation, hope, and unconditional love. A must read for inspiration!

Diane Hovey's "Princess Sophia's Gifts" is a tale that encompasses aspects of what it means to be human: joy, tragedy, acceptance and perseverance.

Diane, 50, lives in Maplewood with her husband and three children. Their youngest daughter, Sonia, was the inspiration for Diane's children's fairy tale, "Princess Sophia's Gifts."

When Sonia was only 14 months old, a kernel of food became lodged in one of her lungs and the family was unaware of its presence, Diane says. When Sonia laid down to go to sleep on that night over 20 years ago, the kernel worked its way up and blocked her airway. When paramedics arrived, Sonia had no vital signs. It took nearly 25 minutes to resuscitate her. As a result, she is very physically limited.

Diane wrote a children's story about 15 years ago as a way to explain Sonia's disability to her peers.

"It sort of stemmed from sitting at the games with our older kids - a baseball game or soccer game or whatever - and the little kids would come up and say 'What's the matter with her?' or 'Why?'" she recalls. "You could see all of the parents straining to hear the answer. What I learned to do was answer the little kids' (questions), adding in enough information to satisfy the curious adults."

Diane's explanations of her daughter's disability later evolved into a fairy tale that Sonia's elementary school classmates could readily understand. Diane says she'd come in and read the unpublished story to Sonia's classmates from first to fifth grade as a way to introduce them to her daughter, and her disability.

"The point of that was to see Sonia and not just her disability," she says.

Diane added that some of Sonia's teachers were apprehensive, or maybe even a little scared, of teaching a child with such severe limitations. But that all changed after they got to know Sonia.

"At the end of the year, every single teacher made a comment about how it was one of their best years of teaching; how incredible it was for the class, and how much the students learned," she says.

The story, in many ways, mirrors Sonia's life and the people she's met along the way. Diane says that some of the characters in the book are composites of the "wise people" they have met during life's journey.

"The people who are willing to be with you, those are the important people," Diane says. "The ones who will celebrate with you, listen to your story and not be afraid of it."

2 comments:
Email ThisBlogThis!Share to TwitterShare to FacebookShare to Pinterest 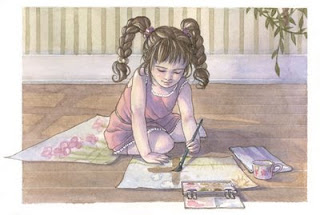 Finally a piece that's personal to me. Don't get me wrong, I love my projects and respect them very much, but tonight I found myself loosing interest. So I stepped back and finished a piece I started oh...man...a couple of months ago it seems.

Hum...maybe not a couple of months, maybe about a month.

I'm pretty happy with how she turned out. After I started painting the background I realized how empty it was. Then I thought "Leaves space for text." if there were some. :) But next time around I'm thinking I better make sure I make the space compliment the action. I could submit this piece for Illustration Friday this week...the word being "Legendary". Jesus Christ is a legend, the biggest one there is. 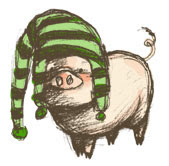 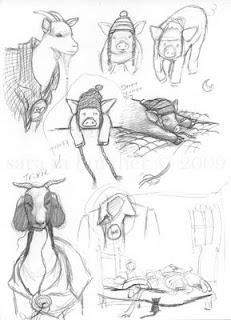 Pretty princess Madie. She's such a cutie and such an inspiration! :)

So why show sketches on this blog instead of my "sara doodles" one? Well, thoughts have been going through my head, and have decided to delete that blog. *sigh* Yes. Alas tis easier to post everything on one instead of two. It seemed like a good idea at the time, but just not working out. Gotta weed out the bad ones, ya know. Not an easy decision, but I think the best one.

The other thought I had was changing my blog spot address. "Warrior Princess' Dream" is quite the mouth full when I tell people about it. :/ So here's wonderin' what to do. I would love to change the address of this blog to something simpler. But don't know what yet, more pen work to do. But would love your feedback if this is a direction you'd like to see as a follower of my work. Am I crazy? Yes we all know that. It's scary because change is scary, especially in this business of publishing. But I pray it's for the best.

So please leave back any thoughts or comments you have on this matter. :) 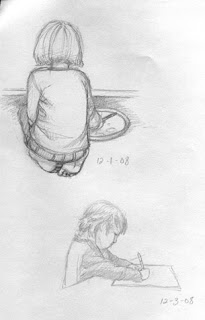 Some of my students... 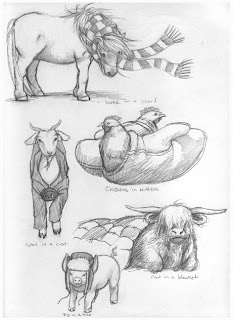 Rough sketches of character's in a friend's children's story. 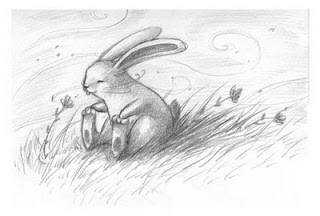 What a month!!! Hey folks, how ya doin? Long time no see. :) It's been a struggle to get my schedule back in alignment after the third week of February. Now you see me, now you don't. On February 17th, my boyfriend, Brian, proposed to me and wedding planning went into effect. Our wedding date is this August 29th! Soooo much to do! At least it felt that way in the beginning.

Brian set up a site showing pictures, our "meeting" story, and the proposal story. If you're interested I invite you to take a look!
http://www.mywedding.com/sarabrian2009

I've been drawing the formal wear, the cake, set up ideas, etc. Aside from that I have been continuing to work on a book project. If you want a sneak peek at the illustrations join my mailing list! To sign up you need to find the form to the left (scroll down a bit), fill it out, and presto! You're a member. You'll receive a newsletter about twice a month or so giving insights, sneak peeks, and updates on my life as an artist and as a human being.

I have posted some sketches in my sketchblog...since it's all I've been able to do since the proposal. Below are a few sketches I've done for the wedding. It's kinda fun being an artist and the bride. :) 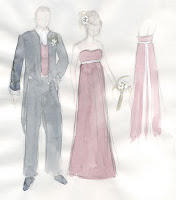 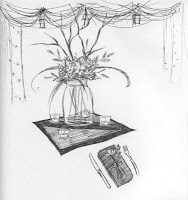 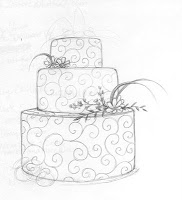 For some reason I can't see posts in my blog. I feel so out of place now. :( It is lashing back for my neglecting to write.