Previous step Skin Tones   |   Beginning A Poppy of a Tutorial 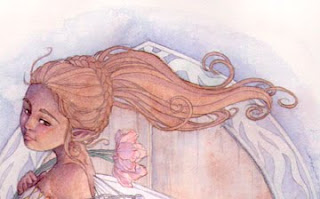 hAiR has, for some reason, been an issue for many.  I don't blame them.  What you see is difficult to translate in drawing.  Many of my students try to draw every strand but get frustrated because it ends up looking so flat.  I remember having that frustration early on but found a way around that in comics.  The hair was broken into shapes, or sections.  That has always helped and now I find much more manageable.  Wish that were true in real life.

Because my fairy became a woman of color I had to darken the color from my initial tone.  So here I added a nice layer of Vandyke Brown, over all strands.

Typically I have three to four colors in my hair.  If you look closely you'll notice your hair isn't just one color, even if you think it's just flat out black.  Because the fairy is more Indian than African, I went with dark browns.

I made a mixture of Sepia and Dioxazine Violet.  The Sepia seemed too flat in color so by adding the violet I gave the brown more depth, richness.  I then proceed to choosing where I want the dark strands, and where I want the lighter ones.  I tend to choose the deeper strands to darken.  Meaning they look like they're layered under other chunks of hair.  This adds more depth and volume.  Also, naturally, the darker strands are further from the light source.

Lastly I add Yellow Ochre to only the parts of hair that are lighter and closest to the light source.  That simple!  It looks complicated, but once you break it down it's actually quite simple.  Four layers - Shadow (Dioxazine Violet), Base tone (Vandyke Brown), Dark tone (Sepia and Dioxazine Violet), and Highlight (Yellow Ochre).

I also added small amount of deeper shadows in her skin and added the Dark tone mixture to her eyebrows.

From here you take the blending, the several tone application, highlights, building up shadows, etc to the entire piece.  Treat each section as you would the skin or hair.  Before you know it you'll be finished.  Next post will hopefully be the finished piece!

BUT if there is something you have questions about or want to see the process of, let me know, and soon, so I can record it.  :)

I've been patiently waiting to see more of this peice....