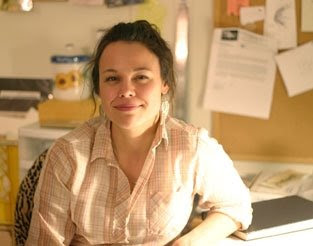 So today I got an email notifying me that the interview I had about a week ago is up. A writer, Dena, contacted me shortly after I started to follow Veritas Magazine on Twitter, mentioning how her editor would like to do a story on me. Excited I of course said yes. She did an awesome job and I thank them for the opportunity. A few days later the editor and photographer visited my wee apartment/studio, which I found fantastic because I not only got to meet a sister and Christ, but two brothers in Christ. To make the world smaller, they know my neighbors across the street and the editor knows my mom. He interned where she worked last year. How crazy is that! They're wonderful people and have put together this online magazine about local Des Moines.

I feel very honored to be approached by them and to be able to share my story. I love the title too...

To look at one of Sara Butcher’s watercolor paintings is to be taken into another world—the fanciful and beautiful swirl together with vivid detail. An artist, teacher, and illustrator, Sara nurtured her lifelong fascination with fantasy into a career—she captures the imaginary and breathes life into it with her artwork. And when God breathed life into her, Sara discovered that fantasy can become reality.

“I didn’t really realize what true fairy tales were like until I found Christianity,” Sara says.
But her love for fairy tales began from an early age—like many little girls—with Disney, not God. Sara’s drawing talent began with stick fairies in markers, and she bloomed as she grew and drew constantly. As a teenager, she would cope with the insecurity of being an artist by creating whole fantasy worlds of her own to get lost in.

Sara eventually turned to paganism to fill the void of spirituality that fairy tales couldn’t fill. “I didn’t do sacrificing, but I’ve always had black cats—there’s nothing wrong with them!” she says. “As a witch you do spells, you want to see something happen. I was a pagan with good intentions, but I was on the wrong side of the fence.”

When Sara started going to church, she was challenged to examine her beliefs and where they came from—and she found she didn’t have an answer.

“There are oral traditions and books. Paganism has been around since sin has been around. But there’s no substance,” Sara says. “I got really mad because I was being asked all these internal questions and I didn’t know answers.”

At the same time, Sara was attending church services at Point of Grace, and she was drawn in by the worship music. Then, week after week, Sara felt the sermons speaking directly to her heart. At one service, she heard a couple speak about working through their difficult relationship with the help of God. Sara was in an abusive relationship at the time, and she gave in to God’s call when their testimony hit home and she realized she needed God’s help.

“I accepted Jesus sitting at a stoplight bawling on my way back home,” Sara says. “I heard that testimony and saw how God can work in our lives. I was thinking, how do they know that’s my life?”

As a new Christian, Sara was inspired by a leader in her church to be a warrior for Christ.
“I would be like, give me a sword, give me a shield, let’s go fight demons! I really reveled in that,” Sara says. “Then I read Captivating by Staci Eldredge, and it took me to heart. She talks about being warrior princesses, and I was like, my name means princess and I can be a warrior—it’s all coming together!”

With her identity in Christ, Sara was finally able to claim her love of fairy tales, as well.
“There’s something bigger out there, and you don’t know what it is, period,” Sara says. “Fairy tales open the gate that anything’s possible, that there’s some kind of mystery to life. I found Christianity and I read Captivating and... talk about fairy tales being reality,” Sara says. “That defined why I had such a love of fairy tales—because it’s God’s story. It’s real.”

Sara even noticed a change in her artwork. She put away the fantasy worlds and fascination with fairies, and the colors got brighter. Where she used to use heavy maroons and purples, lighter yellows, oranges, reds and sky blues started radiating in and taking over the darkness. The pagan symbols she used to draw left, and now she only includes them if she knows it will speak to her audience.

“The painting is coming from a heart filled with the Holy Spirit,” Sara says. “The symbols I use are there to connect a non-believer, a pagan, a Christian, anyone to the painting, so they start looking at it. And it’s God’s painting. The point is that it should speak to everyone.”

Sara now concentrates on freelancing to build her children’s book portfolio while maintaining an Etsy shop, website, and blog. She also teaches at the Des Moines Art Center and attends Re-Church with her fiancé, Brian.

As an artist growing in her relationship with Christ, Sara says her biggest obstacle is having enough faith that God will provide, financially and otherwise. But she fights her worries every day by bringing them to Christ and asking for strength and courage.

“Life got harder after I became a Christian. I know for sure I’m meant to be an artist, but one of my biggest insecurities is whether or not I’m actually following God’s will with my work,” Sara says. “But Christ gave me an enormous amount of hope.”

hehe, I see one of my prints there :)

Thanks for sharing that, Sara. You have a great story!