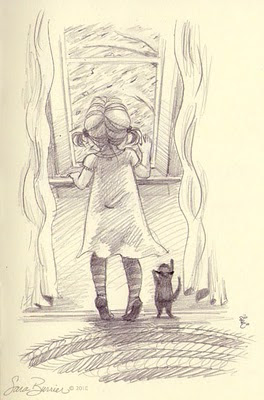 "Snowed In"
graphite pencil in sketchbook | 2010

For the last month and a half we have been knee deep in snow, with two possibly three blizzards. It's fun living in the midwest and don't get me wrong, I love the snow. But the winds and windchills are major bummers. Schools were canceled because of dangerous windchills. So unfortunately they were confined inside their homes, left to find something more creative to do. I don't know about them, but I laid around and was lazy. Sooo boring and no motivation to do anything.

Also some exciting news that I received yesterday. Another drawing of mine has made it into the SCBWI Bulletin for the January/February issue. I haven't received it yet, but once I do I'll share! :D Always a great motivation and ego booster.

This puts me in the mind of my little Savannah.

~Og from the Og Blog (ogblog.enchantstudios.com)

It is lovely and sweet.and yes being trapped by winter isn't any fun.

Whatta crazy winter it's been everywhere. We had snow in GA! Sweet little drawing :)

Very well done! I feel like I am there. I love it!

She's so precious and sweet with her little friend!

Congrats on your drawing being included in the SCBWI Bulletin! I'll be looking for it. :)

This is so very darling. Great take on confined!